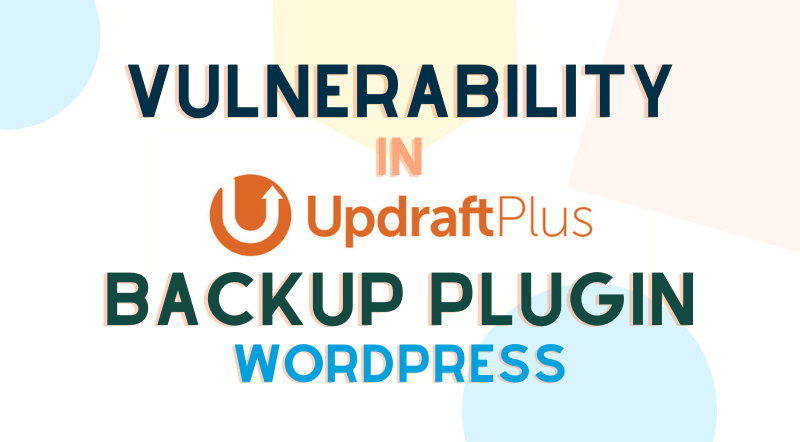 Update: a previous version of this article indicated that an attacker would need to begin their attack when a backup was in progress and would need to guess the appropriate timestamp to download a backup. Since the article was originally published, wordfence have found that it is possible to obtain a full log containing a backup nonce and timestamp at any time, making this vulnerability significantly more exploitable. Wordfence have updated their firewall rule to ensure this additional method cannot be used to leak information.

On February 17, 2022, UpdraftPlus, a WordPress plugin with over 3 million installations, was updated with a security fix for a vulnerability discovered by security researcher Marc Montpas. This vulnerability allows any logged-in user, including subscriber-level users, to download backups made with the plugin. Backups are a treasure trove of sensitive information, and frequently include configuration files that can be used to access the site database as well as the contents of the database itself.

As with all newly reported vulnerabilities, the Wordfence Threat Intelligence team examined the patch and was able to create a proof of concept. In addition, wordfence has released a firewall rule to block any attackers trying to exploit this vulnerability.

This vulnerability was patched in version 1.22.3 of UpdraftPlus, and as such we strongly encourage you to verify that your site is running the most up-to-date version of the plugin and updating immediately if it is not.

UpdraftPlus is a popular backup plugin for WordPress sites and as such, it is expected that the plugin would allow you to download your backups. One of the features that the plugin implemented was the ability to send backup download links to an email of the site owner’s choice. Unfortunately, this functionality was insecurely implemented making it possible for low-level authenticated users like subscribers to craft a valid link that would allow them to download backup files.

The attack starts with the WordPress heartbeat function. The attacker needs to send a specially crafted heartbeat request containing a data[updraftplus] parameter. By supplying the appropriate subparameters, an attacker is able to obtain a backup log containing a backup nonce and timestamp which they can then use to download a backup.

Once the attacker has the backup nonce, they can trigger the maybe_download_backup_from_email function, but in order to do so successfully they’d need to fool a WordPress feature designed to determine the endpoint the request is being sent to:

The issue is the UpdraftPlus_Options::admin_page() === $pagenow check. This requires that the WordPress $pagenow global variable be set to options-general.php. Subscribers are typically not allowed to access this page. However, it is possible to spoof this variable on some server configurations, primarily Apache/modPHP. Similar to a previous vulnerability in WordPress < 5.5.1 also found by this researcher, it’s possible to send a request to e.g. wp-admin/admin-post.php/%0A/wp-admin/options-general.php?page=updraftplus.

Successfully exploiting this vulnerability would take an attacker with an active account on the target system. As such it is likely only to be used in targeted attacks. The consequences of a successful targeted attack are likely to be severe, as they could include leaked passwords and PII, and in some cases site takeover if the attacker is able to obtain database credentials from a configuration file and successfully access the site database.

As such we urge all users running the UpdraftPlus plugin to update to the latest version of the plugin, which is version 1.22.3 as of this writing, as soon as possible, if you have not already done so, since the consequences of a successful exploit would be severe.