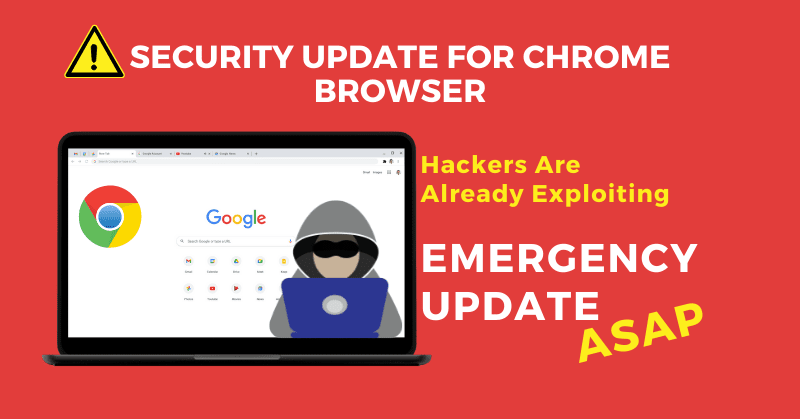 The Tech Giant "Google" has issued an emergency security warning to their billions of chrome users to update ASAP as it is confirmed that attackers are already exploiting.

Google has issued an urgent security update for their billions of Chrome users from their official blog published at March 25, as it confirms that attackers are already exploiting a high severity zero-day vulnerability. Google Company sad "is aware that an exploit for CVE-2022-1096 exists in the wild." which makes every chrome users vulnerable. Therefore, all Chrome users out there has to be aware of this situation and check whether you are updated to the latest version which is Version 99.0.4844.84 (Official Build) ASAP as a matter of urgency.

A zero-day vulnerability is the most dangerous form of attack because it means the vulnerability has been already known to hackers before even Google could address and fix it.

Google says it is currently restricting information about the exploit to buy time for Chrome users to upgrade.

The company has thus far revealed that the threat level is “High”, an anonymous researcher has been credited with reporting the bug on March 23, 2022.

Google also said “Access to bug details and links may be kept restricted until a majority of users are updated with a fix.”

“We will also retain restrictions if the bug exists in a third-party library that other projects similarly depend on, but haven’t yet fixed.”

CVE-2022-1096 is the second zero-day vulnerability addressed by Google in Chrome since the start of the year, the first being CVE-2022-0609, a use-after-free vulnerability in the Animation component that was patched on February 14, 2022.

How To Check Your Chrome Browser Version

You can check your Chrome browser version number by opening the Chrome menu >> going to “Help” >> then Click “About Google Chrome”.

After updating, Chrome must be restarted before you are safe